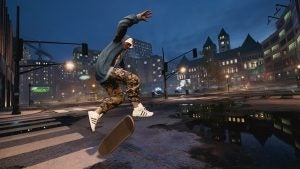 Activision has announced that Tony Hawk’s Pro Skater 1+2 Remastered will receive a second lease of life thanks to a next-gen upgrade and Nintendo Switch port.

First released for PS4 and Xbox One last year, the remaster by Vicarious Visions has been subject to critical and commercial acclaim. It’s a brilliant recreation of two classic skateboarding experiences. Now, it’s coming to more platforms than ever.

The upcoming re-release launches on March 26 will be available across PS5, Xbox Series X/S and Nintendo Switch. On PS5 and Xbox Series X it will be playable at 120fps/1080p or 4K/60fps, offering players an option between peak performance and visuals. Spatial audio will also be supported.

Owners of the Digital Deluxe edition on PS4 and Xbox One will be able to upgrade for free, but regular customers will need to pay a small fee. Given the game only came out last year, charging for an upgrade like this does feel rather gross – here’s hoping it doesn’t become the norm.

It remains unclear how the Nintendo Switch version will operate, but I imagine 1080p/30fps would be the ideal target for such a platform, especially since the majority of players will shift between docked and portable mode at their leisure.

Earning 4.5/5 in his review, Thomas Deehan hurled praise upon Tony Hawk’s Pro Skater 1+2 Remastered last year: “THPS 1+2 Remastered remembers everything that made the classic skateboarding series so great, and brings it back for the modern era. The game is a little slower than some of the more wacky titles in the series, but the focus on pure skill and reward makes it difficult to put down.”

Vicarious Visions, the team behind this remaster, were recently folded into Blizzard Entertainment, so it’s unlikely they will return to Tony Hawk or any other revivals in the future. This is a bit of a shame, given they have done some spectacular work that deserves to be built upon.