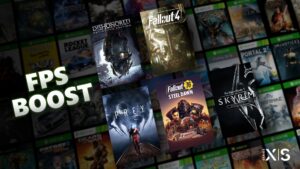 Microsoft is wasting no time in improving its new stable of Bethesda games, retrofitting five classic games with the new FPS Boost technology, to improve the frame rate.

It’s not all good news though. Microsoft says it has had to reduce the graphics resolution for the Fallout games to ensure they runs smoothly.

The FPS Boost tech uses back-end technology to improve the frame rate of previous generations’ games, doubling and, in some cases, quadrupling the original rate when enjoyed with Backward Compatibility on the new-gen consoles.

For the above titles, gamers can expect to see the the frame rate boosted from 30fps to 60fps once FPS Boost is enabled in the Compatibility Options under the Manage Game section. Microsoft says it plans to announce more FPS Boost-compatible games in the near future, which can be played alongside the Xbox Series X games

A month ago, Microsoft announced the technology for Far Cry 4, New Super Lucky’s Tale, Sniper Elite 4, UFC 4, and Watch Dogs 2. It has already brought some “buttery” smooth graphics that weren’t possible on the original hardware, so we’re excited to see Microsoft bring the tech to more backwards compatible titles.

Given The Elder Scrolls V and Fallout 4 were two of the most wildly popular games of the entire Xbox One era, this will come as a huge boost to those who’ve already snagged next-gen machines.

Microsoft’s increasing ownership of studios is likely to benefit gamers through initiatives like FPS Boost, which improves the quality of existing games. There’s a number of Bethesda games in particular we can expect to receive frame rate improvements moving forward. The DOOM reboot, for instance, would be an excellent candidate for this technology.

Microsoft is already putting its new library of games to great use by adding them to the GamePass subscription service, significantly improving the already great value proposition for what is a huge priority for Xbox moving forward.

It seems the $7.5 billion acquisition of Bethesda is already looking like pretty good value given Microsoft also plans to retain exclusivity on future titles, depending on existing contractual obligations. New Elder Scrolls and Fallout games are already in the works, which are sure to be a huge carrot for those considering whether to buy a PS5 or Xbox Series X.