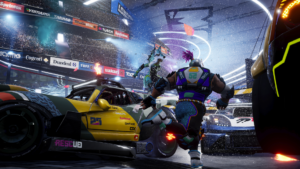 Sony has announced the free PS Plus games for February, including a brand new first-party PS5 game that hasn’t even gone on sale yet – Destruction AllStars.

The Destruction Derby-inspired vehicular combat game was set to a launch tittle for PS5 last November for the new AAA price of $69.99. However, upon news of a delay in October, Sony confirmed it’d be free for its first two-months of its release. Can’t say fairer than that!

The Lucid Games multiplayer title, first announced last summer, offers 16 over-the-top characters, each with their own unique vehicle. You’ll do battle in a number of arenas around the world, taking part in a number of different game modes. Whether in single-player or against online foes you’ll be jumping from car to car seeking to cause as much damage and wreck as many enemies as possible.

It’ll be available to download from Tuesday February 2 until April 5. Here’s a deep dive from a recent State of Play stream.

As well as Destruction AllStars, both PS4 and PS5 gamers will be able to download the Control: Ultimate Edition. From Remember Entertainment, the makes of Alan Wake and Max Payne, Control is a paranormal adventure that earned a 4-star review from Trusted Reviews in 2019.

Our games editor Jade King praised the fantastic lead, satisfying gunplay, cool use of psychic powers and gorgeous looks. She writes: “Control is one of Remedy Entertainment’s greatest achievements. As a shooter, it’s lovingly satisfying to play, as all of its mechanics mesh to create a slick, supernatural explosion of paranormal powers and eclectic gunplay.”

The Ultimate Edition includes The Foundation and AWE expansions.

Finally, for February’s offerings, we’ve got the PS4 game Concrete Genie, which includes a PlayStation VR mode. Gamers are tasked with revamping the town of Denska and returning it to its former glories with a magic paintbrush helping you to combat bullies and solve puzzles.

The post Sony giving away brand new PS5-exclusive with PS Plus in February appeared first on Trusted Reviews.