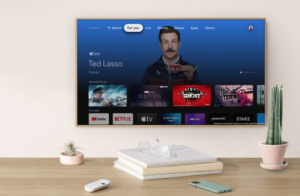 UPDATE: Chromecast for Google TV gets Apple TV Plus

UPDATE 18/2/2021: Google has confirmed the Apple TV app is now available for the Chromecast With Google TV device, originally announced in December.

The update, which is now rolling out, gives device owners there chance to browse their library of iTunes movies and TV shows, as well as the ever-growing library of Apple TV Plus original.

The rollout is coming to Chromecast With Google TV owners globally right now, with some additional features available in the US. In a blog post, the company writes:

“With Google TV in the U.S., you can browse Apple Originals in your personalized recommendations and search results. And with Google Assistant, you can also use your voice to ask Google to open the Apple TV app or play an Apple Original title. If you aren’t ready to watch right away, you can add Apple Originals to your Watchlist for later. These features will roll out globally in the coming months.”

Google also says the Apple TV all will arrive on other Google TV devices from Sony and TCL. Android TV users are also in line for the update.

It’s been a hell of a day for Google and Apple synergy. First Google Stadia arrived on iOS devices and now Google has announced the Apple TV app is on the way to its smart TV platforms.

In a blog post today, Google announced the Chromecast With Google TV device will receive the Apple TV app – and by extension the Apple TV Plus service – early next year.

As well as the Chomecast With Google TV addition, Google says devices running Android TV will also receive the Apple TV app in the future.

In a move that’s beneficial to both parties, those in the Google TV ecosystem will now be able to access Apple TV Plus originals like the brilliant Ted Lasso, and the award-winning series The Morning Show.

Once subscribed, users will be able to see Apple Originals in the personalised recommendations and universal search results. Any subscriptions you have through Apple TV Channels will also be available on the Chromecast with Google TV.

If you have a library of movies and TV shows previously purchased through the Apple TV, they’ll surface when you log in via your Apple TV.

Google TV with Chromecast is a leap forward for Google’s streaming hardware. It has its own remote for the first time and a brand new interface that doesn’t require streaming directly from a mobile device.

In our review, we rewarded the release with a 4.5/5-star score, with Trusted Reviews Editor Alastair Stevenson praising the 40K/60fps streaming, HDR/Dolby Vision support and useful Google Assistant integration. He said the device “matches, if not beats” the Fire TV and Roku rivals. With the Apple TV app on board, it’s a much more complete proposition.

Today’s move comes shortly after Google brought Apple Music to its smart speakers and displays, in a sign of just how committed Google is to ensuring the most services are available on its hardware, even if they’re managed by rival companies.

The post UPDATE: Chromecast for Google TV gets Apple TV Plus appeared first on Trusted Reviews.